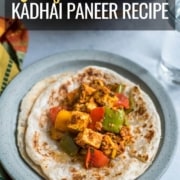 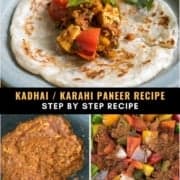 Restaurant-style kadhai paneer is made with freshly ground spices, chunks of paneer, and a blend of onions, peppers, and a spicy masala sauce. It’s a great vegetarian dinner perfect for busy weeknights.

Warm chunks of fresh paneer cook up in a spicy kadhai masala mixed with onions and peppers for this filling and flavorful dinner recipe. This easy paneer recipe comes together in 40 minutes and is packed with spices, protein, and vegetables.

What is Kadhai Paneer?

Kadhai paneer also called Kadai paneer or karahi paneer is a traditional Indian dish packed with bold flavor. The name kadai paneer comes from the utensil for cooking, the karahi, and the main ingredient paneer.

Let’s discuss these two words to understand how the dish got its name.

If you are unfamiliar with a karahi, it’s an Indian skillet used for cooking. Similar in shape to a wok but with steeper sides, this cookware is often used for simmering stews or deep-frying dishes. Recipes made with the karahi often have the word karahi in the name such as chicken karahi, mutton karahi, and this dish, karahi paneer.

The main ingredient, paneer, is a non-melting Indian cheese often used in vegetarian dishes like this one. Loaded with protein, paneer makes a nutrient-rich addition to this spiced masala with peppers and onion.

Why we love this recipe

Aside from the absolutely delicious flavor, here are just a few more reasons to love this kadai paneer.

How to Make Kadhai Paneer

How to Prep Ahead

To make this a meal you can serve your kadhai paneer with:

What is the difference between kadai paneer and shahi paneer?

Why is it called kadhai paneer?

The name kadhai paneer comes from the words kadhai and paneer. A kadhai is a cookware item used in Indian cooking that is similar in shape and function to a wok. Paneer is a non-melting Indian cheese that is the main ingredient in the dish. Since the paneer cooks in a spicy masala sauce in the kadhai the dish is called Kadhai Paneer.

What do you use if you don’t have a karahi?

If you do not have a karahi, you can use a wok or a high-sided skillet to cook the dish. 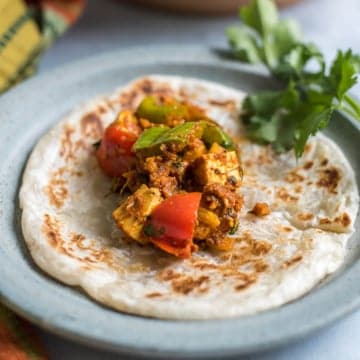 Rest of the ingredients

Making the base curry

Tips Meal Prep Tips
Pantry EssentialsGetting the right tools for your kitchen makes cooking more enjoyable and less frustrating. Here’s a list of kitchen essentials I own and recommend.

I love simplifying Indian food recipes without using highly processed ingredients. My goal is to inspire you to cook at home by sharing easy recipes that you can quickly make in your Instant Pot (or stovetop)...Read more