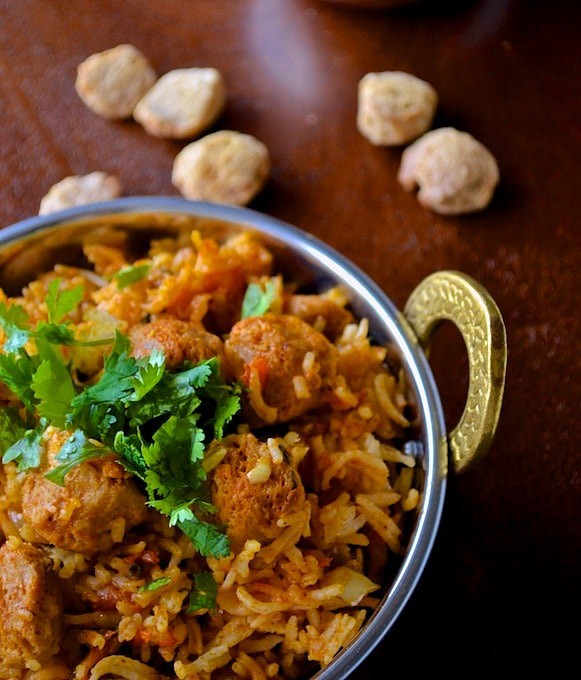 I decided to clean out my pantry this month which meant all those hidden boxes of spaghetti, 10 different kinds of noodles, a few stray packets of ladyfingers had to be either consumed or I would either donate them or toss them out. This year I have been focusing on being a minimalist. Those who know me will know how difficult that is for me. I am the one who orders multiple dishes in a restaurant because I ‘think’ I am ravenously hungry or I cook a lot more than necessary when I have friends over lest we fall short. So overdoing it has always been a problem.

But this year has been different – you can really make a change if you want to.  Alright, coming back to the topic I found a box of Nutrella Soya Chunks in the pantry. I had never experimented with Soya before and the one time my husband had tried to make something out of it, it was a disaster. Since that happened a few years back, I think he forgot all about it and he had gone about buying yet another packet of Soya Chunks last year 🙂

So here we were, wondering what to make out of it. Biryani is what came to my mind and since I had a good Shrimp Biryani recipe, I decided to follow the recipe. We were delighted at the outcome and have decided that this recipe of Soya Chunks Biryani is a keeper. By the way, Soya chunks match the protein content of meat and are considered a meat extender. While they are super easy to make, here’s something you need to remember – Soya chunks need to be repeatedly rinsed at least 3-4 times after being boiled otherwise you will find your dish ruined because the Soya chunks were tasting weird. 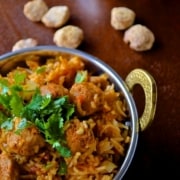